We had the chance to review the game, Say Anything which is a North Star Games product. The title alone had me because it is not often you can play a game that wants you to say what is on your mind and not be penalized.

It is a simple yet extremely entertaining game to play. As you can see from the included supplies that set up and play can happen in less than 5 minutes. The game requires at least 3 players but up to 8 can play. It is recommended for ages 13 and up but I played it with my 5 and 8 year old who loved it.

I have actually played it lots of people over the age of 13 and it was a riot. One group decided to add to the rules and introduced wine while the other truly played it the way it was intended. The rules are basic and simple but the end result is pure fun and laughter. Each player selects a dry erase pen (included) and an answer board along with 2 player tokens which matches their answer board. The player tokens range from a guitar to a car with 8 symbols to choose from. Once the score keeper is chosen the shortest person goes first 🙂 My friends thought I made that up trying to be funny as I stand almost 5 feet 11 inches.

The shortest person chooses an “In My Opinion…”card, read the question and all the players have to answer the question. The answers are written on the erasable answer board and place them face- up on the table. The reader then secretly selects their favorite answer using the select-o-matic 500 and it is placed face down. The other players then place their tokens on whichever answer they think you chose.

It gets interesting with the scoring because people always seem to think they know you answer based off of your personality and might even challenge you. It got extremely interesting when I played with my “mommy” friends. The score keeper then records the score based off the following:

The game ends when each player has had the chance to ask at least one question.

Say Anything is the type of game that even a scrooge would laugh at and enjoy. Most importantly it is not about winning but having fun!

I will be trying this game out in a couple of weeks at a Marriage Conference sponsored by Mocha Moms Inc Northeast Region and this should be interesting…. 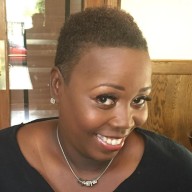